Several years in the past we have made homemade peppermint marshmallows. It has been fairly easy and they turn out really cute.

However, this year it was different.

It was cursed from the beginning and I ended up throwing away most of the marshmallows, sans a few that I saved for Lily who loved them.

But let me start from the beginning.

The recipe that I used I have used in the past and it worked really well, so I don’t blame the recipe at all. The recipe from Ashley Marie can be found  here.

You start the recipe out by basically making a simple syrup by dissolving sugar into water on the stove.

You also have to grease your pan (13 x 9) and cover it with a mixture of powdered sugar and corn starch.

While you are making the syrup you will have to “bloom” your gelatin in cold water for 10 minutes. Once the 10 minutes is reached you add it to the syrup.

This is when everything started to take a turn.

Here is my PSA: use a pot bigger than you think you will need. It will bubble over. You will have all of this syrup spilling over the edges. You will end up scraping off burnt sugar for an hour.

So once I cleaned this mess up I got a bigger pot and it seemed to work out well, but I had lost a lot of my syrup and gelatin which I think is what resulted in the marshmallows being a giant fail.

After it is done boiling for about 15 minutes you have to let it cool to a lukewarm temperature. Given I was ready for this to be done with, I maybe didn’t let it cool completely that led to my next fail of the project.

Once it cools you add it to your mixer and adds the extracts to give it flavor and you whip it up until it is really thick and white.

Once it was thick enough, I poured it into the pan and had to let it cool overnight because it wasn’t solid enough.

Next came the part where Lily could get involved. Because there was so much hot and sticky liquids and stoves involved, she really couldn’t help with anything. So, when it came time to cut the shapes out of the marshmallows, I wanted her to help.

We used small cookie cutters that I found at Target earlier this holiday season.

Lily helped by cutting out the shapes, she would hand them to me and I would dip them in powered sugar to prevent them from sticking together.

When she started cutting them, I noticed that the bottoms were still wet and not the right consistency. They were more like wet clumpy sugar. I ended up letting Lily cut some out and then threw the rest away.

To be honest they were pretty terrible. Lily loved them. I just couldn’t see having these floating in my hot chocolate so the rest ended up in the trash.

But most importantly Lily enjoyed cutting the shapes out and it gave us something to do this evening. 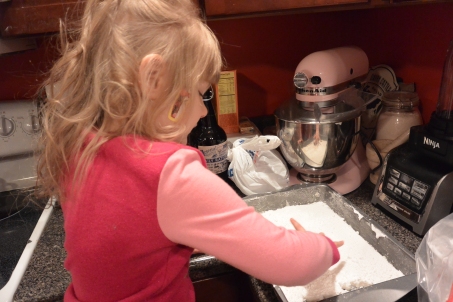 I will just remember to use a bigger pot and then all of this will be avoided.

Did you have any holiday fails this year? Leave a comment below.