Every night we read a picture book to our Mousekatot right before we go to bed as part of our bedtime routine.

Around April I started reading at least a chapter from a longer format book each night as Lily lays in bed with the lights off to try and get her sleepy. (A Kindle and/or book lights are great for this.) We read a bunch of different types of books like “The Secret Garden,” “Ramona the Pest” and “Harry Potter and the Sorcerer’s Stone.”

Lily loved Harry Potter and talked so much about it and his many adventures. (We might be having a Harry Potter themed birthday party this year. I won’t complain!)

Since Lily loved the book so much and I was looking for a way to get Lily to get excited about doing little chores around the house and to also try some new foods. We created a rewards chart that came from Harry Potter and if Lily filled up her reward chart with stars then Hedwig, Harry’s owl who took up residency in our house, would let Harry know and he would send a special gift to her from Hogwarts.

After receiving the chart, Lily worked toward filling up her chart by earning stars for cleaning up her toys when asked, helping to feed the cats, putting her dirty clothes in a hamper and trying to eat more fruit.

The time finally came and Lily had filled her chart. Hedwig flew to Hogwarts overnight and brought back a special package for Lily because she had completed her chart.

Lily was really excited to receive this special gift from Harry.

What Lily received was a Harry Potter blind box, where you don’t know which character you are going to get until you open the box. (Lily loves blind bags and blind boxes.)

We found a seller on eBay who was selling a complete tray of 12 boxes that we bought for a pretty good price and will dole out the boxes when she completes her charts or does something that is a pretty big accomplishment. (One day Hermonie borrowed Hedwig and sent a surprise to Lily through Hedwig because she finished reading the first Harry Potter book.)

So far this reward system has worked really well. She works toward getting the boxes and loves that Hedwig hangs around the house and can be a connection to Harry Potter.

When it comes time to really hit potty training hard and heavy we will probably do a similar type of system. 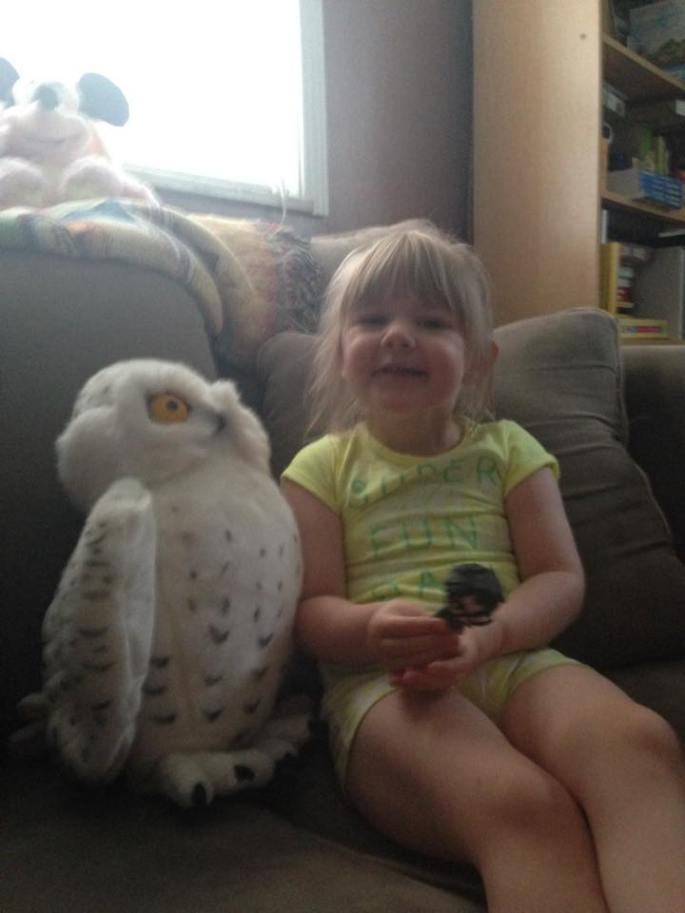 Speaking of winners, I wanted to announce:

Ann K. was the winner of the first every Mousekatots giveaway! Thank you to everyone who had entered and look for future giveaways. Congratulations to Ann!

Do you have any tips or tricks on how to keep your little ones motivated to help around the house? Leave your comments below!